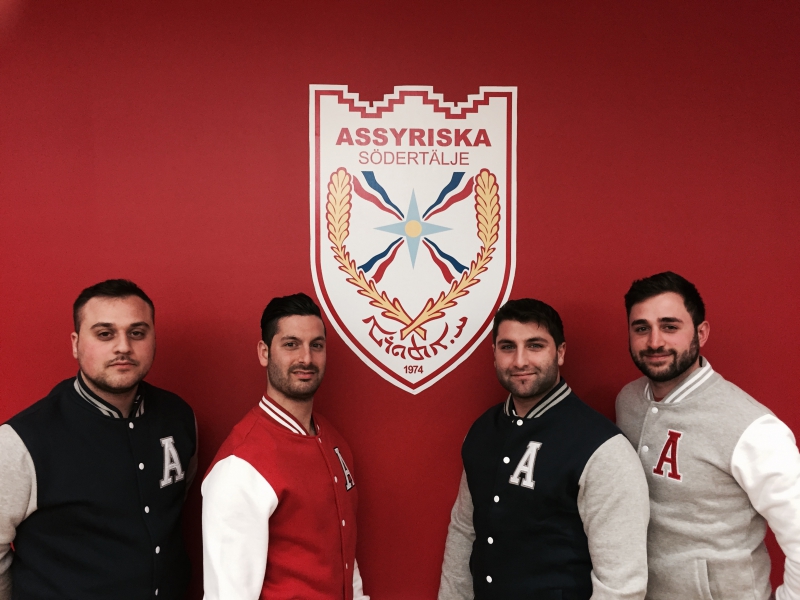 This interview is part of my research on migration, integration and extremism in Sweden, within the frame of the project SCOPE – ‘Strengthening Youth Capacity for Conflict Management and Peace-Building’, implemented by More Mosaic NGO and co-funded by the Erasmus+ Programme of the European Union.

I discovered the Syriac Orthodox Church in Sweden by chance: living in and commuting from Södertälje, it’s almost impossible not to see the two big churches of the community and not to meet anyone who has Syrian origins. This lead me to speak with the archbishop – Mor Dioscoros Benyamin Atas – and then I was introduced to Yusuf Aydin, PR responsible for the board of the Syrian Orthodox Church in Sweden.

Mr. Aydin, can you tell us something about the Syriac community in Sweden?

Syriacs [or Aramaens, a Christian minority originally from Turkey, Syria and Iraq, but scattered around the world Ed.] are one of the largest groups of immigrants in Södertälje. The first families arrived in the 1960’s as refugees from Turkey and settled as workers for the factories in the area (Scania, in particular). As many immigrants do, the Syriacs followed the pattern of familiar links, tending to settle close to each others.

How is the life of refugees that settle today in Sweden?

In the past the patterns of  integration were different. Not many immigrants spoke English (and also less Swedes than now) so they had to learn Swedish faster. The communities were smaller and they needed to get into contact with locals. Who doesn’t speak English nor Swedish feels lost but nowadays he/she doesn’t even need to get out of his/her closed community. These communities grew big quickly and they can “provide” for everything but this way one doesn’t get the chance to integrate in the society. This fosters the separation.

Furthermore, immigration has become more asylum-driven than work-driven, due to wars in Sub-Saharan Africa and in the Middle East. And many develop a passive stance waiting for the asylum permit: grants are subject to criticism because they may delay the need to “make it” in the society, to be active economically and socially.

What about the Syriac community, how was your “path” to integration?

We are a peculiar case: a “minority in the minority” among Syrians in Sweden. Syriacs have been one of the most successful immigrant groups in Sweden, taking advantage of the opportunities that the local environment offered. As of today, our community has established several churches, two soccer teams (Assyriska FF and Syrianska FC), many businesses, three TV channels (Suroyo TV, Suryoyo SAT and Assyria TV) and many associations. We have representatives at high levels in politics, sports, culture and other fields of the Swedish society.

Perhaps being threatened and persecuted in our original lands, brought us to look for social redemption here. Now our main goal is engaging in integration without losing our culture.

In your opinion, what are the barriers that a newcomer faces when arriving in Sweden today?

Different languages, cultures, religions are barriers difficult to overcome. Both your personal experience and the environment that surrounds you may influence heavily your willingness to adapt.

Being rejected or seen as a threat, newcomers might feel forced to put apart their cultures: this leads to a closure towards the surroundings and a desire to preserve what is perceived as “original”. Even people who considered themselves more liberal in their countries can feel the necessity to defend their culture against blending or losing it. People who weren’t conservatives in their countries can become so when confronting another social environment.

Integration in Sweden is also undermined by the very different sense of community that locals have in comparison to newcomers (especially Middle Easterners): Swedish individualism clashes with immigrants’ family bonds.

In general, Södertälje provides a better example of integration than other Stockholm suburbs: in this city the immigrants have proved to be more “ambitious”, starting their own businesses and trying to build a good relationship with locals [other main immigrants groups in Södertälje are Finnish and former Yugoslavian citizens, as long as Middle Easterners, Ed.]. Second and third–generation youngsters feel a “mixed” identity, perceiving their nationality as Swedish but their culture as Syriac.

What about municipalities and government policies? Did something change recently?

Södertälje’s municipality proposed to repeal or modify the “EBO act”, because we need to adapt laws and policies to the actual situation. The EBO act (Lag om eget boende – “Own living” act) means that any asylum-seeker is entitled to find a place to live on his or her own. This law, originated from a non-discriminatory point of view, has proven to be a double-edged weapon. It is in fact increasing isolation: you are now free to isolate yourself and not to mix with the local culture. Even not meeting locals at all. The need to find safety in one’s original community is a natural behavior, but it becomes a problem when it lasts too long.

Can schools and education system in general do something more for integration?

Education is crucial in the process of integration, but its role is rapidly decreasing, due to this process of separation. Neighborhood schools are getting more and more segregated, because some of them have a majority of Swedes and some have almost only foreign-origins students.

When locals leave places, these communities become more and more isolated. Fear rises and less locals know or are interested in understanding what happens in those zones, and at the same time less immigrants are interested in meeting locals or mixing with them.

Do you think something changed in the relationship between locals and refugees after the terror attack in Stockholm? Were there cases of “hate speech” in Södertälje?

Today the Syriacs in Södertälje are not subject to hate crimes but you can detect a feeling of insecurity in the society. Locals and asylum-seekers grow more and more separated and this lack of trust can be felt in everyday chats as in the news, as in politics.

The perpetuation of intolerance increases radicalism and fear. This is an issue that influences also many groups of immigrants: they suffered persecution from majorities or from the government in the past so they tend to perceive other groups or the authorities in general as enemies. A change of mindset is necessary.

What can be done to foster further integration?

I think that churches and civil society, as long as sport organizations, can do a lot to promote this “change of mindset” towards immigration, addressing young people from both sides. Civil society, churches and local municipalities have to find ways to reinforce the values of integration and start a big discussion on common values.

Today the inter-religious dialogue is not much developed, also because many Syriacs are not ready to take this step. The dialogue with other churches was developed in the past and now is time for us to engage in a discussion with Muslims.

It’s not everything about policies: those can be perceived as an imposition by both locals and newcomers. The development of a deeper integration lies in the everyday life and actions.