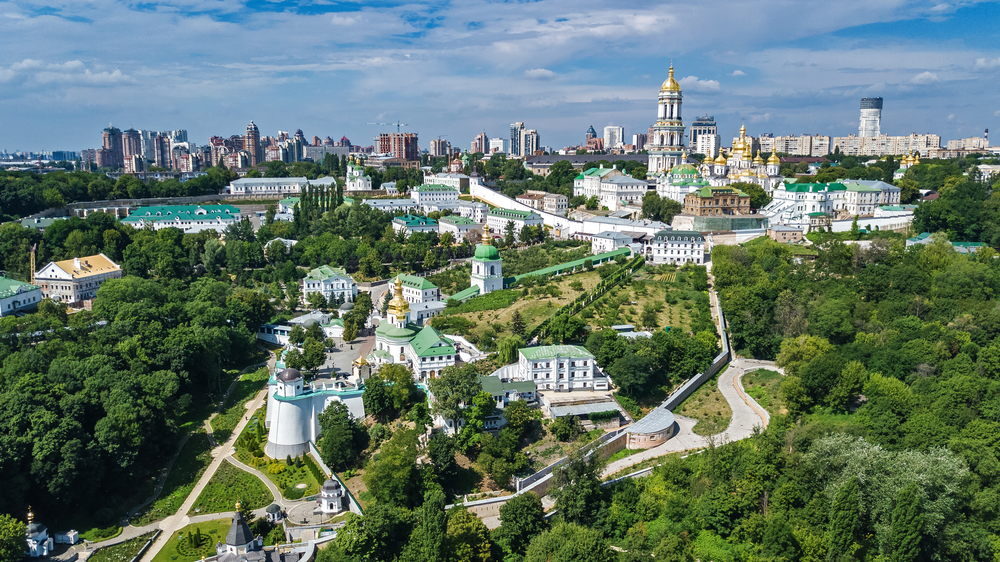 Last week-end,  I had the opportunity to go to Kiev to visit my aunty from Ukraine, newest member of my big and crazy Italian family. Soon after starting our reunion with a delicious pizza, we went to the city center for a walk, making slowly our way under a quick and unexpected rain.

As soon as I reached the heart of the city, I have been conquered by the majesty and beauty of its buildings and churches. Rus-Byzantine ecclesiastical architecture, colorful frescoes and mosaics, baroque churches, terraced gardens, my eyes were flattered by the mixture of different cultures and styles. Moreover, in occasion of the day of Europe, government buildings were even more shining and flashy.

However, since the beginning, I noticed there was something unusual: big shops flaunting luxury and richness were almost empty inside, as well as government buildings, as they  were not opened to the public. In fact, as the guard said  “something was going on  between Brussels and local representatives of the Institutions and visits  were not allowed”.

What is more, my Ukrainian aunty seemed not to be aware of  the beauties of Kiev city center, as if she had been there only few times. Indeed, she asked me to let her know what I wanted to visit since she told me: “ I don’t know where else  to go, I come to the city center only to meet my daughter who lives at the university residence and to have lunch with her”. And again “ City center is only a very touristic place: only tourists and business men come here”.

In other words, there was a voice unheard behind the high rise apartments, government buildings  and  expensive shops. And it was the voice of all the people who could not access the beauty of Kiev city center: those  living in the outskirts of the city, those earning a low level salary to sustain all the expenses for a living, those who don’t participate in public life and those whose the monthly pension is the same price of an expensive hat.

This experience left me a bit sad, but even more willing to keep working towards a more sustainable and equal society, where wealth can be accessed by the majority of population and metaphorically, the city center can be opened to everybody.